It's a Girl!!! Subtitled: Boo on Wal-Mart and Target! And a Little Boo on Culvers! 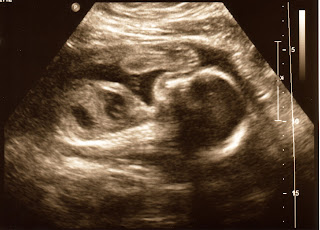 Waving at Everyone!
Today was finally the day! As it turns out, Dr. Ray's test was accurate and we are having a girl! The ultrasound went really well and we have lots of new "pictures" of our little girl. The baby weighs 1 lb 3 oz right now and is doing really well. We are so happy to have comfirmation that she is healthy and that she is, in fact, a female. She cooperated really nicely for the technician and it was easy for both Glenn and I to see it was a girl, even with the tech telling us. Glenn had never even heard the heartbeat before this, so it was special that he got to come along.
After the ultrasound I met Dr. Swansen who is one of the doctors at the Women's Clinic. He seems like a really good doctor and it's nice to feel comfortable with the two out of the three doctors in the practice. Mind you that I haven't met the third one yet - probably will for one of my upcoming appointments. It's a good idea to meet all of the doctors in case one of the other ones ends up being the one you have for the delivery.
After my appointment we had a really nice lunch at Famous Dave's. Aparently 2:30 is a great time to eat lunch there as there were only about 4 other people there and we got our food in less than 10 minutes. The other bonus is that the lunch portions are much less expensive and are a much more manageable size to finish. After this is when things began to go a little downhill.
For months now I've had this glorious vision of Glenn and I happily spending the day registering, eating out, and just having a fun day together. The first sign that my dream bubble was going to burst was when we walked up to the customer service area at Super Target and all the registry machines were down. As it turned out, ALL of the Target stores everywhere had some kind of issue and that they had no idea when it would be back up. Strike one! I told Glenn that I hated being thawarted. He said that I wasn't thawarted, just foiled. I'm not even sure what that means, but it made me laugh and I remembered to thank God that we had a healthy baby girl.
Next stop, Super Wal-Mart. Glenn went to set up our registry while I used the bathroom (because that's where I seem to be found these days) and when I found him he had a weird look on his face. Apparently, they have a kiosk for setting up your registry and printing them but they don't have a gun so that you can actually REGISTER there. Seriously?!?! Strike two.
Glenn and I decided to console ourselves with a healthy snack - namely frozen custard and fried cheese curds at Culver's. Man, do I love those things and they have some calcium, right? On the way in Glenn commented that he hoped they had ice cream. We laughed and went in to put in our order. Glenn ordered a sundae and some cheese curds to share and the girl taking our order said, "We're out of cheese curds." At first Glenn almost thought she was kidding, but then realized that she wasn't privy to the days happenings and the joke he had just made outside. Strike three. We just could not believe that they had no cheese curds at Culver's.
As we sat and ate our custard and talked we realized how sad it was that we were letting stupid things bother us. We have a healthy baby for pete's sake! Who cares if we have to register another time or online? We got to have an afternoon together in Lincoln, spent time together, and had some good food.
To finish up the day we decided to register instead at the Wal-Mart in York. Guess what? They didn't have any guns to register either! Strike four? It may have been a frustrating day but all things considered we have a lot to be thankful for.
Email Post
Labels: baby culvers target ultrasound wal-mart