Do you like Glenn's name for this recipe?  The first time I made it that's what he called it and it made me laugh.
This is one of my favorite quick meals.  I've been trying to do a lot more stuff from scratch lately, but sometimes you need to go back to one of your easy comfort foods that you can make quickly using a lot of ready ingredients.  The original recipe can be found here at Kraft Foods, my old standby.  I love that I can have it ready to go in the oven before the oven finishes preheating.  It really does have all the flavors of traditional cordon bleu but is so much easier and takes a fraction of the time.
On a side note, picky Glenn swears that he doesn't like Dijon mustard but he eats it in this recipe without complaint.

Ingredients:
1- 1 1/2 lbs. boneless skinless chicken breasts
Stove top stuffing mix
3-4 Tablespoons butter for the stuffing mix (this is optional but I like it)
Thinly sliced ham
1 can of cream of chicken (mushroom works well too)
1 Tablespoon of Dijon mustard (you may want to adjust this amount or even leave it out if you don't care for Dijon)
Shredded swiss cheese (you can use slices but I prefer shredded)

Preheat oven to 400 degrees.  Make the stuffing mix according to the box directions.  I usually do the microwave method.  Spray a 9x13 pan with cooking spray. 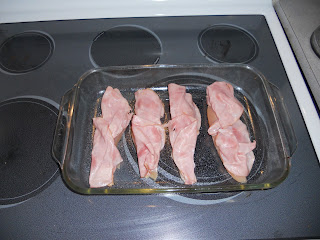 Mix cream of whatever soup and mustard together.  Cover each of the chicken breasts.  It doesn't have to be perfect.  I think it looks pretty gross at this stage, but it keeps the chicken so moist! 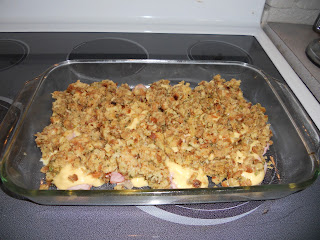 After the stuffing is finished and you've fluffed it with a fork, cover the chicken breasts with it.  Cook for 25 minutes.  You need to use you judgment here.  If you are using large chicken breasts you will need to cook it longer.  That's part of the reason why I cut mine in half (the other part being portion control).

Top the chicken/stuffing with shredded cheese and bake for another 5 minutes or until cheese is melted. 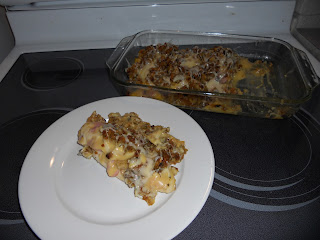 The stuffing is a little crunchy on top and fluffy and moist on the bottom.  The chicken always comes out moist and tender.  The leftovers aren't quite as good because the stuffing gets a little soggier, but we still gobble them up.
Email Post
Labels: cooking food recipe