I decided to make soup with half of the lovely homemade turkey stock I made the other day. I got about 14 cups of very thick (gelatinous actually), rich stock by the way. I froze half right off and saved the rest for this soup. Really there isn't much to this soup, but it is really tasty and very satisfying. I felt so healthy and virtuous eating it, haha! And I even got the Holy Grail of picky eater compliments from Glenn, "Now this is the way to eat vegetables!"
I got out some of the turkey I'd frozen from before (one turkey can sure go a long way!). Normally I would use some frozen egg noodles to make turkey noodle soup, but the store was out of the noodles we like. I thought about using some rice (if you use rice or rice noodles it's still gluten free too). Once I started actually making the soup I decided to just put in lots of carrots and celery instead. I used three stalks of celery and about 7 carrots. I wasn't sure how Glenn would react. I chopped the veggies really small with my Pampered Chef food chopper (like the one pictured below). I love that thing and use it all the time. I'm surprised that it still works as well as it does after eight years of use. 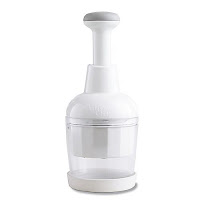 Anyway, I did this for several reasons. First of all, they cook up super quickly if you chop them so they are tiny. Secondly, I wanted to feed this to Olivia and it's so much easier for her if the pieces and little. And thirdly, my picky husband doesn't like big chunks of anything, except maybe meat. Haha.
I heated the stock until it was boiling and then added in the chopped veggies. I then let them cook for about five minutes before I added in the turkey meat to warm through. If you add in the meat too early it can get a little tough. I seasoned it up with a little Kosher salt. I know the stock already had salt, but that's a lot of vegetables and they needed to be seasoned too!
Today I gave some of the cold leftover soup broth to Olivia. I know it sounds gross but she has strep throat and is liking cold things right now. She seemed to really like it and it was actually easier to feed to her because it was so thick. I felt good giving it to her too, knowing that it was so nutritious.
Email Post
Labels: cooking gluten free recipe soup