Hanging Out with "Uncle" Tim

Even though I swore that I would never refer to non-family members as "aunt" or "uncle" I've found myself doing just that.  It could partially be that we already have a niece and nephews that call him Uncle Tim.  I always thought it would be confusing as Olivia got older.  Glenn tells the story of not realizing his "Uncle Terry" wasn't actually related to him until he was at least 12 years old.  I had an Aunt Debbie and Uncle Andy that were really just close friends of my parents.  Is this something common that parents do?  In any case, Tim loves Olivia just as much as if he were her actual blood-related uncle and is so good with her so I don't really mind. 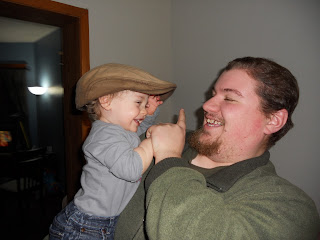