Dinner and a Diaper Bag

Last night's dinner turned out pretty good. The gravy was a bit watery compared to what I remembered so I either need to add a little less water or maybe cook it on high instead. Or maybe add a little flour or cornstarch and turn it to high for a bit at the end. In any case, Glenn certainly had no complaints! I think he may also have been excited to have something homemade instead of from a restaurant after eating out for a week. After a week of not cooking, unless you count making toast and throwing corndogs in the oven, it felt nice to make a real meal again.

Glenn told me when he arrived home that he had sent me a gift that he really thought I would like. It sounded like he thought it might arrive before he got home. I assumed it was something from Indiana like a t-shirt, but when it arrived yesterday I was surprised at how heavy the box was. It turned out to be something I love and have been debating about buying for months now. I was totally shocked to open the box and find my dream diaper bag. Here it is, the Be All by Ju Ju Be in purple paisley: 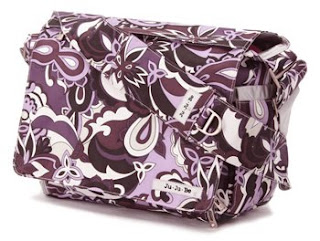 Isn't it cute?! It has so many nice features - teflon protected fabric, antimicrobial linings, metal hardware instead of plastic, insulated bottle/sippy pockets, and it's machine washable! It was pretty expensive for us, but I love that the style will allow me to use it for years and that it's built to last. What a wonderful and thoughtful husband I have! Glenn knew that if I made the decision to buy it that I would feel guilty for spending the money so he took the decision out of my hands. This was a much nicer surprise than an Indiana t-shirt.
Email Post
Labels: baby food menu

Phifer Family said…
I love the bag and I love your last comment. It is much nicer than an Indian T-shirt. LOL
Now, you can tell Glenn that anytime he is in Indiana he could send me a Colts anything. I would be happy to accept! j/k :)
October 30, 2009 at 4:36 PM

Gail Miller said…
Hey, there is nothing wrong with an Indiana t-shirt! BUT the purple diaper bag is definitely better. :)
October 30, 2009 at 6:42 PM