In Her Own Room and Sippy Cup

Last night Olivia spent the night in her very own room.  Her room isn't done.  In fact, we didn't even move her crib since she sleeps in her swing.  We hung a dark towel over the window, moved the box fan in (for air circulation and white noise), and put the baby monitor in with her.  She didn't even notice she was in a different room.  She even slept an hour later than usual!  I've wanted to move her for some time, part of me anyway, because I didn't want to face a fight when it came to moving her if we waited until she was aware of our presence.  It was a little hard not being able to just look over to see if she was okay during the night, but overall it went really well.  It was nice not worrying about how much noise Glenn makes when he gets up for work.  Olivia usually gets up around the same time and I've wondered how much of it is due to hearing him move around.
I've really missed being able to read at night in bed so last night I got to enjoy that for the first time since she came home.  It was so relaxing!  I used to read every night so I'm very excited to be able to do it again.  I currently have about 1/4 left of The Lightning Thief (first Percy Jackson book) and then I'm moving on to The Girl Who Played with Fire (second in a series by Stieg Larsson).  The first is a children's book and the second is most decidedly an adult mystery.  Two of my favorite genres! 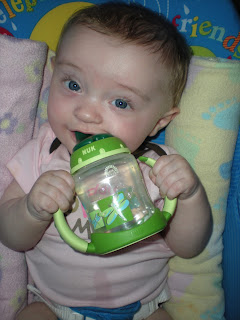 Today Olivia is 6 months old adjusted.  I decided that it was time to start trying out the sippy cup.  I got one that is supposed to be a good transition cup, i.e. the nipple is soft silicon and won't bloody her gums when she flails around with it.  She's not so sure about it yet, but liked grabbing the handles.  I put water in it and my plan is to just let her mess around with it for now.  We'll see how it goes!
Email Post
Labels: Olivia