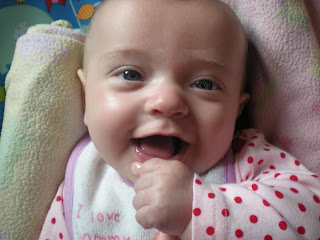 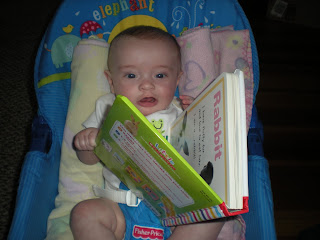 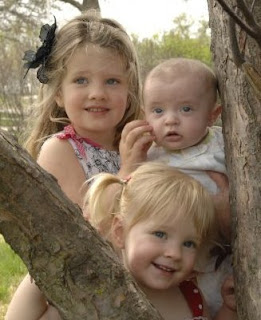 Here are some recent pics of Olivia. As you can see she loves books, just like her Mom and Dad! The last one is all of the Eckert grandkids - so much cuteness in one picture!


Yesterday we went to see Olivia's doctor. She's been eating a little better since we switched formulas but she has been having, shall we say, loose stools since then. For a while she was having 7-8 per day, but has been down to 2 per day for the last week and a half. It had been long enough since her last shots so her doctor was kind enough to let us combine visits so that we didn't have to make another trip to Lincoln in two weeks. Miss O is doing well and is now at 13 pounds 4 ounces. She's in the 10th percentile for weight, just over the 25th for height, and is now in the 55th for head size. Her growth has slowed down some and she is now eating about 60% of what the doctor would like to see her eating.
With this in mind he has asked us to go ahead and start her on yellow veggies. So today I am baking some sweet potatoes and some acorn squash and making baby food. I'm excited to try it since it's so easy - you just bake or steam the veggies, throw them in a food processor, and then freeze in ice cube trays. Once frozen you can transfer them to a freezer bag. Each cube is about an ounce so it's easy to pull out what you need for the day. Later in the week I'm going to make a batch of green beans too. I'll be sure to report on how her first attempt at "real food" goes.
Other than the eating she is doing really well. The doctor made Donald Duck noises while he was testing her muscle tone and she was laughing hysterically at him. It was great and the doctor was even laughing as she kept it up. She wasn't so happy a few minutes later when she got her shots, but we gave her a bottle and she calmed right down.
After her appointment we dropped Olivia off at Nolan and Barb's and they were gracious enough to watch her while Glenn and I had a quick but wonderful supper at HuHot. The kids were great and started right in taking turns holding her bottle. If you've never been to a HuHot it is a chain of Mongolian grills and we love it. My personal favorite is beef with soba noddles (although I love the pad Thai noodles too), carrots, broccoli, and tons of water chestnuts. I then use 3 ladles of The Khan's Favorite, 2 Burn Your Village Barbecue, and 1 Mean Bean Garlic with a half ladle of garlic oil. So good! It's also right next to a Panera so we treated ourselves to some bagels (which are now in the freezer waiting to be toasted during the rest of the week). We got to hang out at Nolan and Barb's for a while afterward and even got to watch some filming of their next movie. The weather was beautiful and it was great to relax on the patio.
We went to a Wal-Mart next. We could have waiting until we got back to York except for one thing. Earlier when we were returning a few things at Target Olivia must have kicked her pacifier out of the carseat. Normally this would not have been a big deal but with no good afternoon nap and having had shots it was sort of a necessity. I packed an extra outfit, 2 bibs, 2 burp clothes, and 3 bottles...but no extra pacifier. Go figure.
After Wal-Mart we went through the Culver's drive thru. Glenn was sitting in back with Olivia so he got to eat a sundae. I was driving so I settled for a hot fudge malt, and by settled I mean loved my life. We got back home pretty late and Olivia went straight to bed. She slept until 5:00 AM, ate, and then slept until after 9:00! It was nice that we all got to sleep in!
Email Post

Anonymous said…
Sounds like a great day and so nice when family can help.It appears that the little O is doing just fine.
April 24, 2010 at 7:57 PM