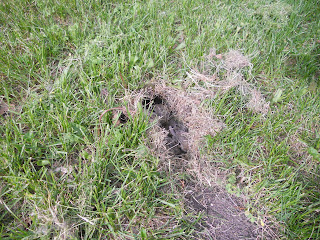 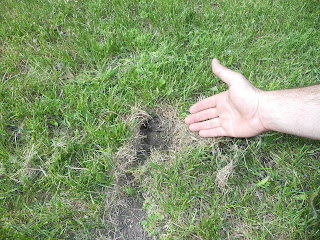 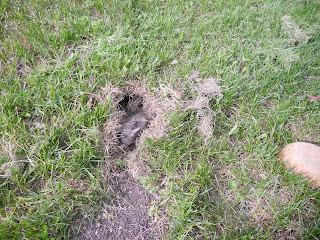 When Glenn mowed tonight he found a bunch of baby bunnies all packed into a little hole in our backyard.  Glenn had a pet rabbit as a kid and I think he really wanted to keep one.  I have absolutely zero interest in having another animal to deal with around here - especially one that isn't exactly domesticated - but I do have to admit that they are pretty darn cute.  We counted seven baby bunnies in all.  Piper has left them completely alone and we're not exactly sure why but that's okay with us.  I think it would break Glenn's heart if she killed one.  And chances are that if she killed one it would smell eventually and she would roll in it and I would have to bathe the stink out of her so I'm not in favor of her doing it either.
I'm not sure if you'll be able to really see them on the pics, but we took a few anyway.
Email Post
Labels: Piper