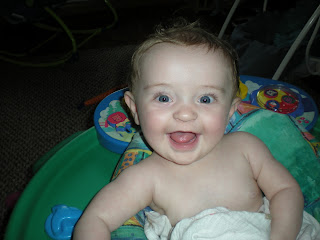 We've had so much going on the last few weeks and between that and forgetting the camera at my parents' house I just haven't gotten around to posting. The main news is that Olivia has yet another double ear infection. At her 9 month appointment we are going to talk to her pediatrician about what options we have and about whether or not getting tubes in her ears might be a good idea. She's had an ear infection every 4-5 weeks for the past couple of months and it's making her (and me) miserable. She also started running a fever on Saturday which was strange because she had been on antibiotics for almost 4 days at that point. I'm guessing she picked up a virus of some sort. Thankfully it broke sometime Sunday night/Monday morning and she seems to be nearly back to her normal self. Her sleeping habits are completely all over the board though again - for example yesterday she got up for the day at 5:00 and today it was 8:00. It seems like every time we get a decent schedule going she has another ear infection and it goes out the window. Hopefully we can get that resolved soon - the days go so much more smoothly when we are on a schedule!
We also had Olivia's 6 month adjusted age NICU follow-up appointment. She weighed in at 16 pounds 6 ounces! Hard to believe she's pretty much quadrupled her birth weight. The developmental specialist says she has great leg strength but that we need to work on her core and upper body strength. We have to make her do these exercises, one of which is a bit like push-ups. Olivia hates them, but I guess it's just one more thing in a long line of making your kid do what's best for them and not what they want. :) She was so tired when we arrived at the appointment - at was pretty late in the day - that she wouldn't really grab the toys they put in front of her. This is not normal at all and I was shocked that she didn't just put them straight into her mouth, but I think the tired combined with the strange environment was too much. Because of this we are going to go back for a 9 month adjusted age check up instead of waiting for her 1 year. This is fine with me. If she is getting behind it's best to know sooner rather than later.
As you can see from the pictures Olivia finally has enough hair to keep a bow in place. She doesn't even seem to notice them. I'm being careful not to put them in unless I can supervise (not in the car for instance) because they're not very big and I don't want her to suddenly notice them and choke on one. Perhaps I'm paranoid but I'm okay with that!
Email Post
Labels: Olivia