A lot of people around here use baby slings or moby wraps. I'm not really into attachment parenting (although if that's your thing that's cool with me) but I liked the idea of baby-wearing if for no other reason than that I might be able to get things done around the house. Olivia has been pretty high maintenance and it's been hard for me to finish anything while trying to give her enough attention. We had a sling in pretty much perfect condition that Lindsey had used with the girls and we decided to try it with Olivia. EPIC FAIL. She basically screamed a lot. We tried it again a few weeks later with the same results. Then there is this reason why I'm not planning to try the sling again. You'd think having the kid right there would make it easier to pay attention but maybe that's why you wouldn't worry as much.
We thought about borrowing a moby wrap to try it out (I'm not paying that much money for a bunch of fabric if she hates it too) but haven't gotten around to it. Plus I'm not sure if I can master its complicated instructions (seriously, they have videos online to try and help you figure it out). My mom suggested putting her in the bouncy seat in the kitchen while I was trying to get things done in there. She only tolerated being in it for about 10 minutes, which is enough time to wash some bottles and maybe unload the dishwasher if I'm fast but not much else. I thought maybe she wasn't sitting up enough to really see what was going on so we decided to look at new bouncy seats (ours was a hand-me-down) and see if there was one that would sit her up more.
While at Wal-Mart I found an infant-to-toddler rocker. I have to tell you that I really thought this was a good plan and once I dragged Glenn over to look he agreed. She could use it for a long time with the 40 pound weight limit which made it a much better buy than a bouncy seat. It has a two position back so she can sit up or lay back more depending on what is going on. It does have a battery-powered vibration thing that's supposed to be relaxing for babies but we haven't used it yet. It has a kickstand so you can also make sure it doesn't rock. And it has the all-important toy bar! After Olivia went to bed I decided that I wanted to put it together all by myself. It did take me a while to put together and honestly I was getting pretty frustrated trying to line up the screws with the holes through the bars (Glenn finally took over and had the rest done in seconds) but I have little experience in assembling stuff like this and even less patience.
The next morning I put on some music, put the seat in the kitchen, and started to clean. Olivia lasted an hour! She really seemed to enjoy being able to sit up more and see what was going on. I've had her in it almost every day since and she lasts anywhere from 45-60 minutes. I can wash dishes, vacuum, do whatever - I just take her from room to room. She also likes sitting in it when I sit on the floor facing her to play with her. Also great is that it keeps her upright enough that I can put her in it soon after she eats (we have to keep her upright for about an hour usually to help with her reflux). We do still have to prop her up a bit when it's in the more upright position as she tends to slide to one side over time. I don't always use the toy bar because I think it makes it harder for her to see what I'm doing sometimes, but she does seem to like it. I really think we are going to get more than our money's worth on this one. 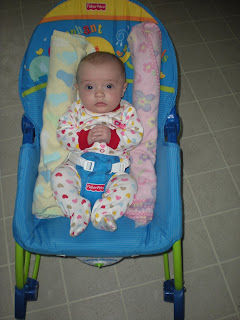 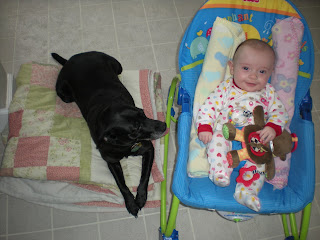 Aunt Barb said…
Yea! Glad you found something she likes! What a great thing to be able to accomplish a few things and have a happy girl at the same time.

Our kids never liked the sling, nor the baby backpack/frontpack thing. And they just made me hot and grumpy. And think of what muscular arms you have/will have from carrying her around without a sling! :)

Anonymous said…
Amen to Aunt Barb"s comments!!Whatever works and believe me"Mothers Should get a patent on their creative ideas.See you soon!
March 20, 2010 at 8:48 PM

The Ferguson Family said…
Brookelyn hated the sling. In fact, she would scream and try to push her way out. She does LOVE the baby bjorn though. She love that her arms and legs are free and she can see so much from up there. It has come in handy when we go shopping and disneyland. I have also used it around the house when my arms are getting tired of holding her.
March 23, 2010 at 12:26 PM

Melissa and Travis said…
Sounds like Olivia is A LOT like my first son, Noah. We did do the sling and he liked it at about 7 months, but before that nothing seemed to work and I would get nothing done but holding him all day. Because my husband slept during the day, I would not even have lunch most days for fear that setting him down would set off a huge crying spell. I'm so glad you found something that worked. I quickly discovered that parenthood is all about finding what works for your kid and your family.
March 23, 2010 at 1:34 PM