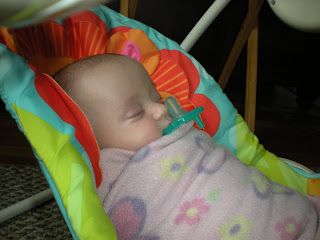 Her pacifier came out of her mouth, but she managed to keep sucking on the rim of it in her sleep! 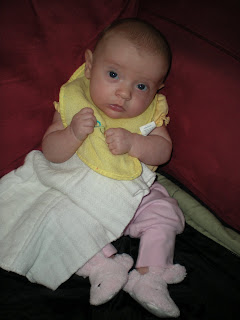 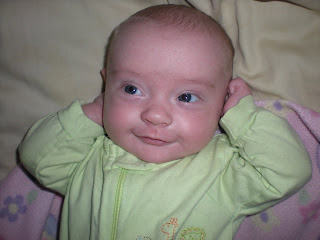 It's scary to me that she can already look this mischievous.

Tomorrow Olivia is 4 months old. It suddenly seems to be going so fast! Today she had her 4 month check up. The doctor started talking about introducing rice cereal and solid foods and I thought, "Why is he telling us this?" And then suddenly I realized, "Because before her next appointment she is actually going to be eating sometimes instead of just drinking! Holy cow!"
Olivia weighed in at 11 pounds 2.9 ounces, gaining just over 7 pounds since birth. Quite a feat in my opinion! She is 23.5 inches long and her head is 16 inches. Going by actual age she is in the 24th percentile for height and 9th for weight (up from 5 last time). The doctor forgot for a moment that she was a preemie and was confused when he realized how tall Glenn and I are, but laughed when he ran the numbers for her adjusted age and said they made a lot more sense! For her adjusted age she is in the 75th percentile for height and 50th for weight. He said she is slowly catching up!
As far as her eating issues go he said that around 2 months is usually when reflux is at it's worst for a lot of babies. Since that is about her adjusted age that would make sense. Due to the issues and also since she has gained weight we are going to increase her Zantac dosage slightly. If that doesn't help we will be trying another medication in a week or so. I sure hope something helps! He also said that thanks to the fact that she is on higher calorie preemie formula that she is still doing okay even though she is not eating as much as he would like right now.
The rash turned out to be related to cradle cap somehow and is looking better. He said she just needs to outgrow it for the most part. I still think the swaddle blankets made a difference so we won't be using the fleece ones anymore. Besides, it will be getting warmer and warmer soon and we won't want her to overheat.
Developmentally the doc was really pleased with her progress. For most things she is right in the middle of the actual vs her adjusted age. Since preemies can sometimes be behind even their adjusted age we're so happy that she is doing as well as she is. I've been surprisingly okay with this, especially considering my competitive nature. Something about having a preemie makes me feel like average can be pretty awesome!
Other than that she did well with her shots. She slept through Glenn and I eating at Culver's (our compromise between Long John Silver's for Glenn and Jimmy John's for me). She wasn't very happy when we got to Target. Glenn found their display couch and swaddled her and she fell asleep while I ran around and found everything we needed (including the new swaddle blankets. Thanks to Brenda for the suggestion - we found them at Target!). She slept a lot on the way home and so far is doing pretty well. I really hope she does better over the next few days than she did the last time she had shots. She needs to go to Hadley's birthday party on Sunday!
Speaking of birthdays...is it bad that I'm already planning Miss O's first birthday party? If you know me you know I love to plan. I'm thinking pumpkins...
Email Post
Labels: Olivia

Anonymous said…
Enjoyed the new photos~~I can see her Mother's naughtiness in her little face.If you are worried about feeding her cereal,your Mom was fed cereal in the hospital.Good old Dr, Hill
March 5, 2010 at 9:26 PM

MoDLin said…
Looks like Olivia is growing nicely. That's GREAT!!! The pictures are adorable, especially the one with the impish grin. She's probably thinking, "just you wait til I'm mobile!"
March 8, 2010 at 12:07 PM