First time going to church! Hating her hat a lot! 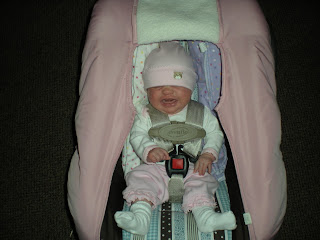 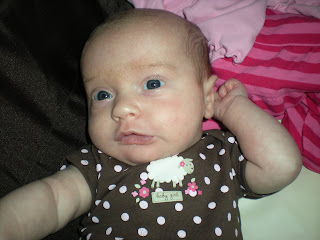 Phew, it's been a crazy last few days. Today Olivia is 11 weeks old, which puts her at 4 weeks corrected age. Olivia had her official two month appointment on Monday. She weighed in at 8 pounds 10 ounces sans diaper and was 20 3/4 inches long allegedly. I say allegedly because I'm really not sure how accurate the nurse really is when she measures our squirmy wormy. The important thing is that she still seems to be growing well. I've organized her 0-3 month sized clothes and have them all washed and ready to go and I'm guessing in the next couple of weeks she will be able to start wearing some of the smaller ones.
Olivia got her first round of immunizations while we were at the office (and no, this is not an opening for anyone to debate me about kids getting shots. Feel free to not give your own kids shots, just keep them away from mine until she has all of hers). Monday night she was doing fine and acting normal so we thought that things were okay. The Zantac seems to be helping and she hasn't been eating while crying. Life is settling down again, right? Wrong-o poncho. She sure had us fooled!
Tuesday after lunch she started getting fussy and would only nap if I held her. Things got progressively less fun from there. She wasn't doing much more than crying intermixed with screaming by the time Glenn got home from work and didn't pass out until 11:00. She still ate (it was the only extended time she was quiet) so we just figured it was a delayed reaction from her legs being sore, etc. Once she finally slept she slept really well so we decided the worst was over - wrong again.
Wednesday started out the same way but she decided to cry until 1:00 AM. Glenn took off work yesterday so that I wouldn't lose my marbles and because we both were exhausted. We called her York doctor and also the pediatrician in Lincoln we had seen. Both said to keep an eye on her, watch her temp (she'd been running a low-grade one), make sure she eats, etc.
Last night she was much better, still a bit fussy but nothing like she had been, and she even was asleep by 10:00. Today so far has been blissful in comparison to earlier in the week. I hope the trend continues!
Email Post
Labels: Olivia

Jacqueline said…
Hope things are smooth now. We've been praying for your sweet little girl, and it's awesome to see to big(relative) and healthy now! And, we tried the BBQ biscuits the other day, YUM! Keep the recipes coming.
January 22, 2010 at 3:43 PM

Laura said…
Thank you for being so bold and decisive on the vaccine topic! Love your honesty. And seriously, if you ever want some company, give me a call. I am very used to screaming, and I know having someone around to share in your misery makes it a little less awful. ;) And after living in not a small town, the drive really doesn't bother me either.
January 23, 2010 at 12:56 AM