We finally got our new camera. I've been a bit lost since ours was accidentally broken some weeks ago. I'm so excited to share some new pics and a video with everyone! 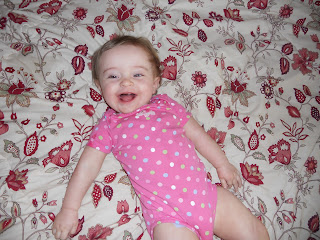 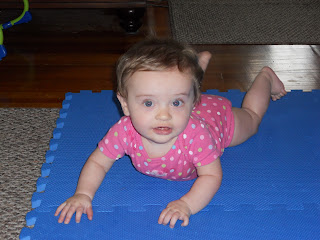 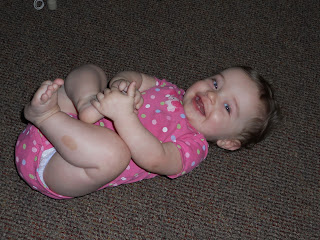 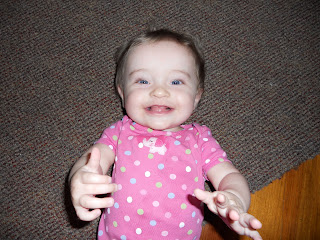 Olivia now has three teeth that have poked through - two on the bottom and one on the top. She likes to clap when she's excited in addition to kicking now and will even clap when you tell her to - most of the time anyway. If you hold out your hand and tell her to give you "five" she usually will. She really loves books and reading. The past few days have been so great to watch as she holds a book up and "reads" out loud to herself. It warms my heart to see my little reader! She gets so excited when I read to her and it's one of the few things where she will actually sit up supported for more than a few minutes. She still seems to dislike sitting up and while I have seen her pull herself into the position she usually lays right back down. She loves cords and shoelaces and we have to keep a close eye on her because she can roll and half-crawl around so quickly now. Olivia also enjoys tearing up paper and catalogs. She loves pounding on the computer keyboard and I often let her "chat" with Daddy on messenger while he is at work. Glenn loves it when he gets an unintelligible message in the middle of our conversations. I put her on my lap and she literally lunges for the keyboard! The other thing that seems to interest her most right now is Piper's dog tags. She will roll across the room to wear Piper is laying just to try and grab her tags. Even crazier is that today she tried to pull the tags down to put in her mouth! I swear Piper looked at me as if to say, "Seriously? I'm putting up with this?" Olivia also had her first night away from mom and dad - three actually. I went along with Glenn on a business trip and she stayed with her Tandy grandparents and Aunt Michele. She did just fine and surprisingly enough, so did I. It was nice to have some time for ourselves in the evenings and I enjoyed relaxing in our hotel and taking in some sights in St. Louis. We did call to check in several times a day, but I don't think we were too obsessive about it. Haha!
Last week Olivia had her first real illness in quite a while. When we picked her up from the Tandy's I expected a huge smile when she saw us. Instead she seemed a little lethargic and when I picked her up she was really warm. Once we were home we took her temp and it was 102.2. As time went on she was congested and coughing, and vomited from time to time (usually on me) besides having her top tooth trying to come through. Even on Tylenol and Motrin she was still running a low fever. The first night was the worst as she woke up every 30-40 minutes. Then she only took three 20 minute naps during the next day. She didn't want to lay on the floor but would squirm like she wanted down whenever I tried to hold her. We were both exhausted and honestly both getting pretty crabby by the time Glenn got home. Her fever broke that night and we all got some sleep but not nearly enough. She still didn't nap well and while she was a little better was still pretty fussy. She looked really peaked and had dark shadows under her eyes, poor thing. I was looking forward to the weekend for some help from Glenn but then that night he got sick! It was a long 4-5 days in our house. I managed to stay healthy until last night and now I'm sick. I'm disappointed because we were supposed to visit my grandma this weekend but it will have to wait until there are no sickos in our house.
Email Post
Labels: Olivia