Well, I Didn't Get the Flu...and Olivia Update 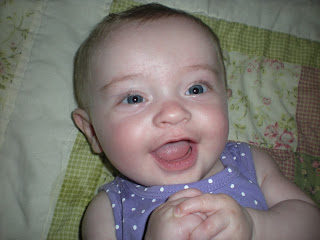 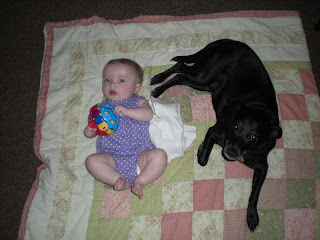 Here are a few pictures of Olivia from the last couple of days. As you can see she's been in a pretty good mood. She likes to wiggle and kick a lot. Her favorite toys are still burp cloths and the monkey that we hang on her car seat, but lately the ball she got from Katherine for Christmas (as seen above) has been shooting up the ranks. The way it's constructed is great because she can really get a good grip on it. She often hits herself in the head with it, what with all of the wild flailing she's doing lately, but no longer seems to mind as much. She also doesn't want to learn how to sit. She likes to be laying down on a blanket or likes to be standing while you hold her hands. When I try to hold her hands while she is sitting she just pushes up with her legs and stands! Oh, well. She'll learn it eventually. She tried peaches for the first time this week. I thought maybe she would gobble them up since they were sweeter, but she eats them pretty much the same as the other foods so far. She only eats about an ounce at a time but is getting better at the actual eating part. Also, Olivia is starting to get a lot more hair all of the sudden. I think we might be able to put an actual bow in her hair one of these days. It's coming in much lighter than the hair she lost and seems to have some wave/curl to it when she gets out of the bath.
As for the rest of my title, I did not in fact get the flu from Glenn. Instead on Wednesday night I got food poisoning. We can't figure out what exactly it was from since Glenn and I ate mostly the same things, but it was not a good time. I felt pretty queasy all day Thursday and Glenn ended up taking care of Olivia quite a bit. I felt better this morning but after a busy morning running errands I ended up with a migraine in the afternoon - the kind that will only go away if I sleep for 2-3 hours. I'm so thankful that Glenn was already home! I feel bad that he wasn't able to do as much on the woodwork, but he assures me that it will still get done, it will just take a bit longer working on it after he comes home from work some nights. I really was hoping to get everything done this week so I'm a little bummed out, but such is life!
Email Post
Labels: Olivia

The Ferguson Family said…
Olivia reminds me of Brooke, wiggly, happy, and oh so cute!!! Brooke did that for awhile where she didn't want to sit, but as soon as she realized that she cold play on her own she was all over it!! I love that footed onesie in the first picture. She is so beautiful and I wish they get together, I think they would really get along.
May 28, 2010 at 11:21 PM

Anonymous said…
As usual we loved the pictures.she seems to have grown so much since Mother's Day/Now is the time to have a lot of fun with her
May 29, 2010 at 9:15 PM